I Returned to Dayton on Wednesday November 9th from an excellent trip to Bogota. This trip marks the end of my travel for 2016 which took me around the world to more than 30 cities. We continue to be one of the fastest growing martial art organizations in the world. After more than 25 years of research, my goal is less on the quantity of followers and more the quality of the leaders around me. That’s where I would like to start this report on my latest trip, hosted by Sifu Johnatan Martinez.

One of the unique characterizes of our Shaolin Wing Chun kung fu family is that our leaders have experience and understand in the reality of hand-to-hand combat skills. That means they are either fighters or know how to train fighters. With fighting skill as a foundation, that’s when we come in with our Shaolin Wing Chun methodology, concepts, and strategies.The fighters appreciate we offer through this approach.

This is consistent with the conclusions of my research. Wing Chun wasn’t created by a farm girl who was being forced into a marriage against her will; Wing Chun was created by high level warriors with a focus on efficiency.

Efficiency is not about what you prefer, or the look or the style of a fighter. Efficiency is based on how the top level operates in any area of human activity. The progression is this: when you first start, you discover what is real and what doesn’t work. Then, you begin to make what works into something practical. Then you take the practical to the cutting edge, which means it works very well.

How do you improve what works very well?

That’s the start of efficiency – the study of how to achieve more by doing less. 300 year ago, three groups – the Shaolin Warriors Monks, the Ming military and high-level martial artists – together defending China against a foreign invader arrived at a paradigm shift in fighting of maximum efficiency.

This is the essence of Wing Chun; it is on efficiency. Many in the martial arts community are starting to recognize our way of teaching Wing Chun which allows them to benefit from the art of Wing Chun without thinking they are switching styles.

I’m very proud to say that this is happening in Columbia. Sifu Johnatan Martinez is a very experienced fighter in the martial arts plus ex-military special forces. His students have excellent Heaven, Human, Earth fighting abilities and they are committed to showcase their Wing Chun skill on top of that foundation.

Recently, they had a string of successes from jujitsu to full-contact kick boxing.

In January, our kung fu family will have the youngest female fighter at 18, Karol Ximena Naranjo Lopez, making her debut in the MAA ring from Sifu Johnatan’s school. Not only does he have a stable of great fighters, he also is developing a cadre of leaders.

On this trip, we promoted 4 students as Junior Instructors:

My workshop covered Shaolin Wing Chun’s progression from the First Hall to the Shaolin Wing Chun Halls, which involves life skills, health and fitness skills, combat skills, to combat efficiency. I was honored by many of the outsiders that participated as well as the local kung fu community putting up an excellent demonstration of their skills.

The Columbian martial arts community got to see the depth of Wing Chun – we had instructors from Karate, Taekwondo, Kung Fu, Hapkido, and Jujitsu that same together to witness Shaolin Wing Chun.

Once again, I want to recognize my disciple, Sifu Johnatan Martinez’s accomplishments in Columbia.

I am sure great things will continue to happen with this young man’s leadership in the Colombian martial art community due to his dedication. 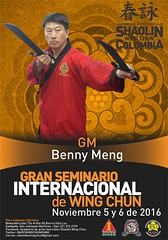 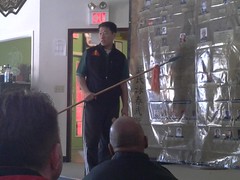 One response on “Report on Bogota, Columbia 11/16”